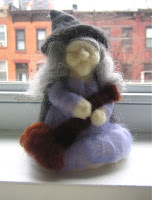 My two year old niece, Sidney, named one of my new needle felted figures today, "Sidney Gnome."  She apparently saw herself in this little gnome!  I can sort of see it now in the cute, chubby little cheeks, but the green curly beard prevented any earlier associations between the two.
I have also listed a new needle felted grandmother witch on etsy.  My first attempt at needle felted people figures came during the Christmas season, when I made a handful of Father Christmas figures and tree top angels.  These figures materialized fairly quickly and gave me much joy, but I've been unsure how to translate this joy outside of the Christmas season. Several ideas have been swirling around in my head the past few months:  fairy tale collections such as snow white, fantasy figures such as witches and wizards, and little woodland figures.  I have been afraid to try my hand at them.
The mood struck yesterday, however, and my little hands began to fly in anticipation of who would emerge.   I thought I was making a wizard to start, but after seeing the face that was appearing, I knew that she was in fact a 'she' and a witch.  After her completion, I proceeded right into making the little gnome companion.  It is such a thrilling feeling of anticipation to discover who these figures will become.  They each have such a unique personality.  My hands will often not move fast enough for me!
I have such excitement now to see who will emerge next.  I think you will be seeing quite a few more of these figures on etsy from now on.
I have also joined two etsy street teams this week:
The {NewNew} York Etsy Street Team-  a team of crafters and artists in and around the New York City Area.
NaturalKids Street Team-  a team devoted to creating all natural items for children.
I hope you will check out their blogs.
Posted by Katy 1 comment:

wind in the willow- it sold!! 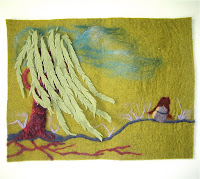 i sold my wind in the willow wall hanging on etsy yesterday!!  such a huge barrier to overcome, and i am so grateful it was purchased by the person who always helped encourage and nurture my art through the years.  this is also the same person who taught me the beautiful song, which inspired this wall hanging.  it is always sad to see a favorite piece, created with love (and often the frustration of finding the right path to take it!!) leave your hands, but in this case it was absolutely perfect.
today, i replenished my etsy page, adding four new items.  a few of them were wall hangings, which i hope will have equal success in finding good homes.
Posted by Katy No comments:

Spring is here at the Brooklyn Botanic Gardens 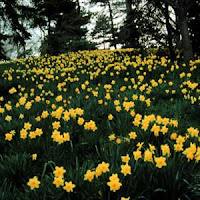 signs of spring are slowly beginning to appear here and there in brooklyn. viewing all of the first blooms of spring together in beautiful compliment at the botanic gardens, however, provides a unique renewal of spirit each year.

today, our craft collective honored the beginning of the spring season by taking a trip to the brooklyn botanic gardens (www.bbg.org) for renewal and inspiration. the trees and plants are recognizing the new season as well, despite the chilly temperatures. we began the day by visiting the steinhardt conservatory, with large glass greenhouses containing refreshingly warm desert and tropical climates and plant life. living in an urban environment, it is exciting to visit the bright abundance of color in the conservatory anytime of the year. there is a unique and wonderous beauty, however, in the subtlety of the start of spring. the contrast of the twisting outlines of numerous enormous bare trees with the soft touches of very detailed color throughout is inspiring.

i realized today that this gift of early spring has been influencing my current crafting projects. i will be listing some new wall hangings soon on etsy, featuring the use of similar contrasts by combining simple wool felt outlines with small bursts of colorful detailed needle felting. i hope they capture the wonder of the rebirth of life that I saw today through the eyes of my two year old niece, sidney.
Posted by Katy 1 comment: 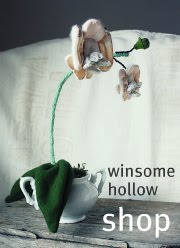